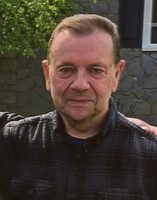 James D. Smith, 81, of Rome, NY, passed away on January 2, 2022, after a brief illness. He was surrounded by his loving family at the time of his passing. He was born in Rome, NY on April 7, 1940, son of the late Erwin and Mae Frank Smith. Raised in Rome, Jim graduated from Rome Free Academy, Class of 1958. He was united in marriage to the former Kathleen Pelano on June 29, 1968, a blessed marriage of 53 years. Jim worked as a Supervisor at Revere Copper Products, retiring in 2008 after 46 years of service. He proudly served in the New York Army National Guard. Jim's focus in life was on his family and hobbies. He was an avid outdoorsman who enjoyed hunting and fishing. Jim also loved spending time rooting for his favorite sports teams, the New York Mets and New York Giants. In addition, he also spent time woodworking, gardening, tinkering with mechanical objects, and reading. Jim is survived by his loving wife, Kathy; a daughter and son-in-law Karie-Ann and David Raynault, Winter Springs, Florida; a son and his fiancee, Jeremy Smith and Jessica Fonseca, Burbank, California; a grandson, Derek Smith, New Hartford; a sister and brother-in-law, Mary and Stephen Stone, Fort Mill, South Carolina; and many extended family members, friends and neighbors. He was predeceased by his parents, Erwin and Mae, sisters Katherine and Shirley, and his son Jeffrey Smith. Per Jim's wishes, there will be no funeral services or calling hours. In lieu of flowers, memorial contributions may be made in Jim's name to his favorite charity : St. Jude Children's Research Hospital, 501 St. Jude Pl, Memphis, TN 38105-9959 Arrangements are by the Nicholas J. Bush Funeral Home, Inc., 7751 Merrick Rd., Rome, N Y. To offer online condolences, please visit www.njbushfuneralhome.com