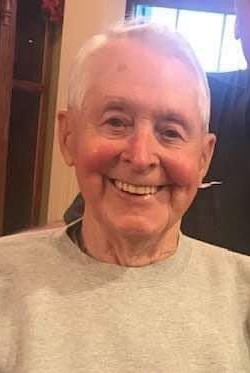 Please share a memory of Richard to include in a keepsake book for family and friends.
View Tribute Book
Richard J. Parker, 90, of Rome, NY, passed away on Monday, July 11, 2022, at Rome Health. He was born on May 27, 1932, son of the late Carl E. and Helen S. Baldigo Parker. Richard was educated in Rome Schools. He proudly served with the U.S. Air Force during the Korean War. On October 17, 1959, he married Barbara Esposito in St. John the Baptist Church. She passed away September 18, 2020. Richard was the former owner and operator of Conley Liquor Store in Sherrill, NY. He was a former employee of Xerox Corporation and Turning Stone Casino Security. Richard was a member of St. John the Baptist Church, Rome, Sherrill American Legion, Toccolana Club, past member of Little Roaring Brook Hunting Club. He was an avid outdoorsman. Surviving are two sons and daughters-in-law: Richard M. and Eileen Parker, New York Mills, Thomas A. and Kati Parker, Oneida, a daughter, Joy Schneider, Rome, ten grandchildren and four great grandchildren. Also surviving are a sister, Donna Guerrieri and sister-in-law, Judy Parker, all of Rome, and several nieces and nephews. He was predeceased by his wife, Barbara and a brother, Carl Parker. A Mass of Christian Burial will be celebrated on Friday, July 15, 2022, at 11:00 a.m., at St. John the Baptist Church with the Rev. Paul F. Angelicchio officiating. The family will receive friends following the Funeral Mass. Burial will be in St. John the Baptist Cemetery. There are no calling hours. Arrangements are by the Nicholas J. Bush Funeral Home, Inc., 7751 Merrick Rd. To offer online condolences, please visit: www.njbushfuneralhome.com
Friday
15
July

The family will receive friends after the Funeral Mass.
Online Memory & Photo Sharing Event
Online Event
About this Event

Share Your Memory of
Richard
Upload Your Memory View All Memories
Be the first to upload a memory!
Share A Memory
Send Flowers
Plant a Tree