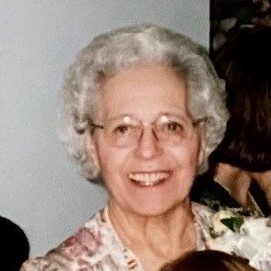 Please share a memory of Angela to include in a keepsake book for family and friends.
View Tribute Book
On May 16, 2020, our beloved mother Angela G. Messineo, 98, of Rome, succumbed to the Covid-19 Virus. She was born in Canastota, New York, on September 22, 1921, daughter of the late Antonio Greci and Antoinette Caparelli Greci. Her family moved to Rome after the death of her mother. She graduated from Rome Free Academy in 1939. Angela was united in marriage to Sam A. Messineo on October 11, 1947. He passed away on April 15, 2004. Angela's life was always about her family, putting forth all her effort to support, love and celebrate her children and their accomplishments. Angela was involved in community organizations, especially those connected to her children's schools and her church. During her children's attendance at St. Mary's school, she volunteered in the school cafeteria, as a teacher's aide in the classroom, and a parent helper on school trips. She was also an assistant Girl Scout Troop Leader. Angela was active in several organizations at St. Peter's Church including Altar Rosary Society, St. Peter's Seniors, Theresians, and Associates of the Sisters of St. Joseph. Angela and her husband were proud to be able to send their children to Rome Catholic High school, and devoted many years, from 1963 thru 1980, tirelessly working with the parent organizations there. She was president of the Mother's Club at RCH, volunteered in the cafeteria, organized the volunteers for the food booth at the annual RCH festival and baked and prepared a multitude desserts and food that would be served there. She was also in charge, along with her good friend Sally, of the Snack Bar at the Thursday Night Bingo at RCH for 14 years. Every Thursday she would be in her kitchen at home preparing brownies, apple chip squares and other foods that would be sold and served at bingo that night. She and Sally took great pride in the money that they were able to raise for the school. Angela was an accomplished seamstress, creating most of her clothes and her children's special occasion outfits. She put her skills to good use and was in charge of the costumes each year for the RCH Red and White Musical Players productions at the Capitol Theater. She made alterations, created costumes and was with the cast at final rehearsals and both nights of the Play, making sure all actors were dressed, properly fitted and ready to go. We also fondly remember our mother's culinary talents: especially pies, cakes, cookies and every summer fresh strawberry, blueberry, apricot, raspberry and grape jams and jellies from berries she picked herself with her good friend Dode. At Christmas she took great pride in the many dozens of cookies she baked for her family and friends, and preparing plates of these cookies that would be given out to special people in our lives. Angela's greatest source of pride were her children and grandchildren, and if there was an athletic competition or a recital that they participated in, she was always there cheering them on. It did not matter where the event took place. She would be there. Angela is survived by her son James Messineo and his wife Faith, of Memphis, TN, three daughters, Maryann Cox of Rome, Linda and her husband, David Carlson, of Rome and Annette and her husband Michael Durnack of Bethlehem, PA; grandchildren: Brad Cox and his wife Nancy, Brian Cox, Erik Carlson, Krista Carlson, Elaina Durnack, Zachary Durnack and great grandchildren Caroline Cox and Charlotte Cox; three brothers: Ernest Greci, Anthony Greci and Louis Greci and two sisters-in-law: Vera Greci and Delores Greci. Angela was predeceased by her parents, her husband Sam, sisters: Lucy Carrier and Josephine Ballew and brothers; Michael Greci, Joseph Greci and Peter Greci. The family would like to extend their gratitude and appreciation to the caring and professional staff of the Rome Hospital Care Facility, 3 East, for the kindness, compassion and care shown to our mother Angela, especially Piper, Pauline, Maureen, Laura, Russell, Tracy, Kim, Tammy, Kathy, Deb, Taylor, Liz, Tori, Victoria, Tammy, Patty, Brittany, Sue Ellen, Dallas, Laura, Megan, Donna, Shelly, Linda and the rest of the crew. It was a comfort to us knowing that you were there faithfully for her in her last days when we could not be there due to the COVID-19 Virus restrictions. In lieu of flowers, memorial contributions in Angela's name may be made to Humane Society of Rome, Inc., P.O. Box 4572, Rome, NY, 13442-4572, Jervis Public Library, 613 N. Washington St., Rome, NY, 13440 or Planned Parenthood Utica Center, 1424 Genesee St., Utica, NY 13502. Services will be private. Burial will be in St. John the Baptist Cemetery. There are no calling hours. Arrangements are by the Nicholas J. Bush Funeral Home, Inc., 7751 Merrick Rd. To offer online condolences, please visit www.njbushfuneralhome.com

Funeral services will be private.

Burial will be in St. John the Baptist Cemetery.
Online Memory & Photo Sharing Event
Online Event
About this Event

Share Your Memory of
Angela
Upload Your Memory View All Memories
Be the first to upload a memory!
Share A Memory
Send Flowers
Plant a Tree