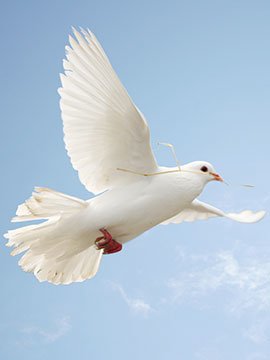 Please share a memory of Pauline to include in a keepsake book for family and friends.
View Tribute Book
Pauline L. Bush, 92, of Peabody, MA, formerly of Rome, passed away on Tuesday, September 29, 2020. She was the beloved wife of the late Nicholas J. Bush, to whom she was married for fifty-nine years at the time of his death on November 14, 2007. Born in Rome, NY on December 7, 1927, she was the daughter of the late Paul and Mary DeLutis Lucci. She graduated from Rome Free Academy in 1945. Pauline was Vice President and Secretary of the Nicholas J. Bush Funeral Home, Inc., which was founded in 1948 by her late husband. She was a member of St. John the Baptist Church and former member of the Mother of Christ Sodality. Pauline enjoyed traveling, spending time with her family, and cooking and baking for holiday gatherings. Pauline is survived by her loving children: a son and daughter-in-law, Nicholas P. and Joanne Bush, Rome; two daughters and sons-in-law: Janet and Steven Cronholm, North Attleboro, MA, and Elaine and Joseph Beggan, Manchester, MA; four grandchildren: Andrew S. Cronholm and his wife Kelly, Seattle, WA; Sarah M. Cronholm, Boston, MA; Laura Bush Jenkins and her husband Mark, Hertford, NC; Nicholas M. Bush, Park City, UT; and four great grandchildren: Theodore, William and Sarah Jenkins and Hunter Hall Cronholm. Also surviving is a brother and sister-in-law, Paul A. and Kathy Lucci, of Rome, and several nieces, nephews and cousins. In addition to her late husband, she is predeceased by her sisters, Gilda J. Lucci and Helen Martini. A Mass of Christian Burial will be celebrated on Monday, October 5, 2020, at 11:00 a.m., at St. John the Baptist Church, with the Rev. Paul F. Angelicchio officiating. Friends may call at the Nicholas J. Bush Funeral Home, Inc., 7751 Merrick Rd., on Sunday, October 4, 2020, from 2-5 p.m. Anyone wishing to attend is required to wear a mask and adhere to social distancing guidelines. Burial will be private. Memorial contributions may be made in Pauline's memory to St. John the Baptist Church Memorial Fund, 210 E. Dominick St., Rome, NY 13440 or Parish Visitors of Mary Immaculate, Marycrest Convent, P.O. Box 658, Monroe, NY 10949-0658 To offer online condolences, please visit www.njbushfuneralhome.com
Sunday
4
October

Share Your Memory of
Pauline
Upload Your Memory View All Memories
Be the first to upload a memory!
Share A Memory
Send Flowers
Plant a Tree